Baltimore City, MD: A Jurisdiction in the Asbestos Litigation Unlike Any Other

For decades, the Circuit Court for Baltimore City has been one of the nation’s top filing jurisdictions for asbestos-related lawsuits. A single law firm, the Law Offices of Peter Angelos, filed most of these cases. The law firm, whose namesake owns the Baltimore Orioles, has let thousands of its cases languish for years – sometimes for decades - resulting in a backlog of 27,500 open active asbestos cases in the Baltimore City court. The Baltimore City court also houses 7,600 inactive asbestos cases filed by plaintiffs who are not sick and may never develop asbestos-related impairment under objective criteria used by the medical community.

As the Wall Street Journal recently reported, there is currently a legal and political battle in Maryland regarding how to deal with the large number of open active cases in Baltimore City. The Baltimore City judiciary has put in place a plan to bring forth 500 cases each month and separate the viable cases from the nonviable cases so the viable cases can proceed to trial.  The Angelos firm has allowed many of its cases to age without activity on the docket for so long  that the firm is unable to satisfy the basic requirements needed to have most of its cases set for trial, such as being able to locate the plaintiff or a family representative or co-workers who will corroborate the plaintiff’s claims of asbestos exposure.  Therefore, the Angelos firm is voluntarily dismissing over half of its cases at the court’s monthly case status conferences.

The Angelos firm is pushing the legislature to consolidate the cases and bring all the open cases to trial at once.  Given that at the court’s monthly plan has produced more than half of the cases resulting in a dismissal, it seems  that the  majority of the firm’s asbestos cases cannot stand on their own merit.  Therefore, consolidation of all these cases would have the result of hiding the meritless.  Defendants oppose the mass trial plan because it would result in settlement payments to plaintiffs with nonviable claims thereby depleting resources needed to compensate future plaintiffs whose claims are viable.

A key reason the cases have piled up in Maryland is that the vast majority of asbestos lawsuits filed in Baltimore City do not involve cancer; instead, the plaintiffs allege non-malignant conditions such as asbestosis, which often has little impact on a person’s daily activities.  These cases have low values compared to the mesothelioma cases that other heavy-hitter asbestos plaintiffs’ firms are targeting through lawsuit ads on television.  The significant volume of non-malignant filings in Baltimore is an outlier when compared to other jurisdictions involved in the asbestos litigation. 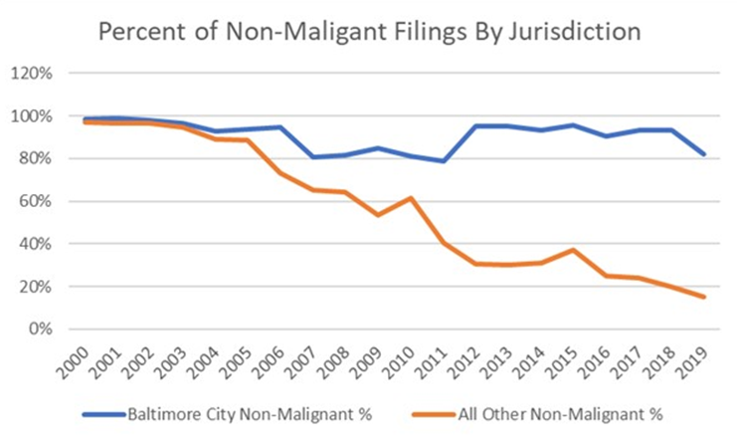 In Figure 2, we compared non-malignant and mesothelioma filings from 2014 through November 2019 in Baltimore City to other jurisdictions in the mid-Atlantic/northeast region and to other jurisdictions that receive a high volume of asbestos filings: Madison County, Illinois; St Louis, Missouri; and Los Angeles, California. 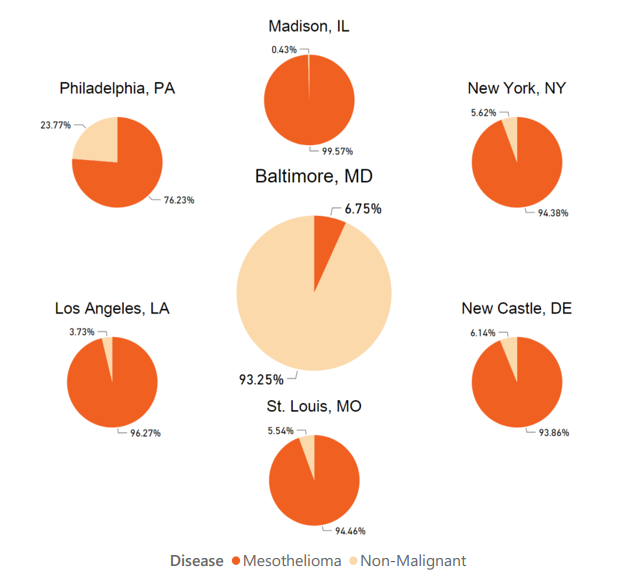 The Baltimore City asbestos docket does not resemble any other in the U.S. because it remains dominated by plaintiffs without cancer. Mesothelioma cases that are the focus of the litigation in other jurisdictions are rare in Maryland.

If the Baltimore City court’s status conference system continues, it will eventually clear the backlog of cases here while, at the same time, plaintiffs with viable cases are able to proceed to trial. In time, the process will recalibrate the litigation in Maryland to resemble filing practices in the rest of the U.S. Consolidation, on the other hand, will encourage the filing of more questionable cases. Baltimore City will remain a significant outlier if the Angelos firm mass consolidation plan is accepted. We will continue to monitor the status of Baltimore City’s asbestos backlog and report on what changes, if any, are made by the legislature. 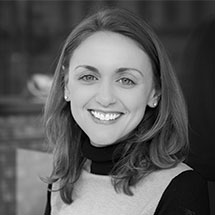 Having spent much of her career serving clients who are asbestos defendants, Michelle Potter is an authority on the current state of the asbestos litigation industry. At KCIC, her day-to-day role is to manage client relationships and lead projects to develop and implement claims processing procedures and systems, as well as to perform complex analyses of different types of claims and insurance.